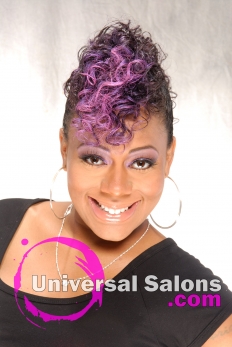 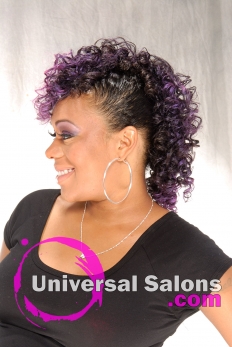 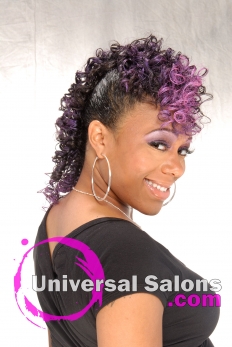 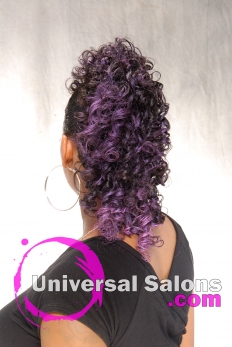 The Mohawk is very striking indeed, particularly when viewed from the side, when you can see how high the middle hair is in relation to that on the sides. The stylist begins by trimming the hair short except for that middle area, which looks somewhat like a lizard crest. Some in the front is extra long and hangs over the head. It also extends shortly below the neck line (see the back view on the Universal Studios page for this style; they always provide four photos of those they post, one from each angle). She or he then uses curlers for further styling, and concludes by spraying or dyeing the long hair red violet. The color is brightest in the overhanging section. Also when viewed from the front, the whole head of the model seems to taper upwards, almost like a hill.
Red-violet is one of the best colors for hair; certainly if the person on whom it is done has hair that is naturally black — as is the case in these pictures — that color provides a pleasant tonal contrast while at the same time blending in; there is not so much contrast that the colors clash. The color of the hair dye also fits in well with the wearer’s eyeshadow.
This style was created by Apryl Mcabee from Hair Solutionz by Apryl in Laurel, MD. Her phone number is (240) 586-4094. Ms. Mcabee has created four other styles depicted at Universal Studios, a site that brings together the hairstyles created by coiffeurs and coiffeuses from all across the nation. Those who have had their hair done at her studio think that her services are wonderful and are impressed by the affordable prices and by the beauty of the place, which is about as great as her customers’ hair when Apryl has finished the job!