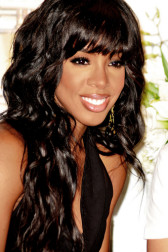 Kelly Rowland is beautiful. Few people would contradict this fact, regardless of the hair styles she chooses to flaunt. Black hair style is constantly in the public eye because of the way a woman can change her entire look from day to day, based on their hair: extensions, weaves, braids, curls, colors, and even spikes.

Kelly Rowland hair styles are as equally varied. While her genuine and captivating beauty prevails, regardless of her usually dark brown tresses, Rowland’s hair styles have been referred to as “roller coasters” because what frames her million dollar face is always changing.

She has been both praised and criticized for her long tresses. When Kelly Rowland chooses to wear her hair long and straight, some hair experts have criticized that the ends look straggly and unhealthy. Others argue, though, that the long look is hot. In a recent appearance on X Factor, she received comments for her hair’s impressive shine. A favorite black hair style for Kelly Rowland is when she struts the runway with long and large curls. She has been noted for her red highlights and days with an Afro, too.

We all have good and bad hair days. Celebrities like Kelly Rowland have the unfortunate situation of being constantly judged by the beauty police. They catch photos of the fabulous, the frizzy, and the downright awful.

Here are 24 black hairstyles from the top hair salons in the raleigh, Durham and Fayetteville NC areas. All of these cosmetologists are nationally published.

Nothing can change up your look faster than a new and elegant hair color. We asked our senior editor Dre’ Ramseur Blanton to search for the hottest hairstyles in our library that involve hair color.

Pixie hairstyles command attention. We’ve looked through thousands of images to find these 35 short pixie haircuts for black women in 2020.