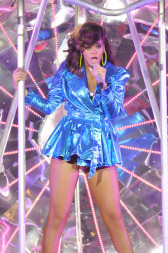 There are few entertainers with as much style as Rihanna. The singer, who is best known for her hit songs, “Umbrella,” “Disturbia,” “Don’t Stop The Music,” and “S&M,” is often praised for her unique style, commonly being called a pioneer when it comes to fashion. It’s her hair, however, that has recently been turning heads.

In the past, Rihanna, who is of African American decent, caused quite a stir after dying her hair a bright red in mid 2010. She kept this fire engine red hair color for over a year, visiting several hair salons in order to maintain the color. Despite keeping her hair bright, she would often change the hair styles from short to long to curly and everything else in between.

Rihanna has recently been spotted without her brightly colored hair, however. At Rihanna in Concert at the O2 Arena in London on
October 6th, 2011, Rihanna was spotted with a much more natural looking scalp. Her hair was a beautiful chestnut brown and of medium to long length just past her shoulders. The hair was wavy with curls towards the bottom and seemed to suit the singer just as well as her previous hair styles have, but with a much more natural looking appearance.

With Rihanna being so well known for her previous red hair, it’s unclear whether she will be keeping this more natural appearance. Many believe that it may be more bentifical to the African American community to see more black hair styles that look natural, rather than parading around in an obviously fake color.

Surely if Rihanna is able to embrace her more natural black hair styles, others will as well.

This hair style was create in a much simpler way, unlike Rihanna’s last hair style, which cost as much as £2,000 a day at local hair salons. With this hair style, all that was needed is to take large sections of brown medium length hair, wrap it in a curling iron for a few seconds, then release. This helps Rihanna to achieve the large waves. After that, simply tuck behind your ear and you’re ready to rock the stage.