Rihanna’s Flirty Yet Sophisticated Do

Home - Rihanna’s Flirty Yet Sophisticated Do

Rihanna’s Flirty Yet Sophisticated Do 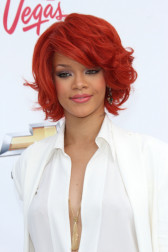 This year the 2011 Billboard Music Awards was held in Las Vegas Nevada at the MGM Grand Garden Arena on May 22, 2011. Many stars brought their all in fashion and hair styles to the award show; however, Rihanna stood out from the crowd. Rihanna sported a flirty and sophisticated hair style to the 2011 Billboard Music Awards. Rihanna has become known for her fashion as well as her hair style. Over the years, Rihanna hair style has evolved along with her and her music. It seems as though her hair tells a story of its own. As she changes and progresses in her music career her hair seems to do the same. She is not afraid to take risks with her hair or her music.

For the flirty and supplicated do Rihanna sported to the 2011 Billboards, she most likely received a wet set. This type of hair style is done in almost all black hair salons; it is a very common hair styling technique. This involves washing the hair, then rolling it while it is still wet, and finally sitting under the dryer until the hair is totally dry. Then the rollers are taken out and the hair can be styled as pleased by the beautician. Many different hair styles can be achieved using the wet set, including the one Rihanna wore to the 2011 Billboard Awards. This do can also be achieved by using a curling iron as well. However, considering the heat and humidity that is associated with Las Vegas, Nevada, she most likely received a wash and set which hold up better in the heat and humidity. Either way, Rihanna looked beautiful for the event.

UniversalSalons.Com has a twenty-year history of getting thousands of hairstyles published in some of the largest hair publications in the world. Our talented make up artists, retouch artists and support […]

Choose the Top Hairstyle from our Durham NC Photo Shoot

Choose the Top Hairstyle from our Durham NC Photo Shoot

For the first time in our company’s history we went to beautiful Durham NC for one of our hairstylist photo shoots.

Now that summer is in full swing and you have your wardrobe and skin care routine in place, it is time to focus on the perfect summer do. If you are not bold enough to go for a short pixie cut, but are tired of your long hair, one of these styles may be the perfect solution for your crowning glory.